Putting jank and the OODA loop next to each other, it’s hard not to see the similarity. Both have two timelines racing against each other. Both describe one timeline trying to go a bit faster than the other — and there’s one timeline that consists of a repeating sequence of steps.

The question that got me excited was: “What does jank look like for the OODA loop?” To answer it, I did some light reframing to express the OODA loop as the timeline view that we’ve learned from rendering animations.

In this timeline view, the environment’s OODA loop becomes the ticking clock. Within each tick of this clock, we fit the familiar pipeline-like process: observe, orient, decide, act.

This setup is not exactly the same as having two independent nested loops, interacting with each other. However, since we’re most interested in situations where the nested loops are closely matched, this simplification works well enough. Here, the environment sets the pace and we try to match it. With each tick of the clock, the next round begins.

In this framing, the OODA jank is the situation when the cycle of the inner OODA loop is taking longer than the one of the environment. 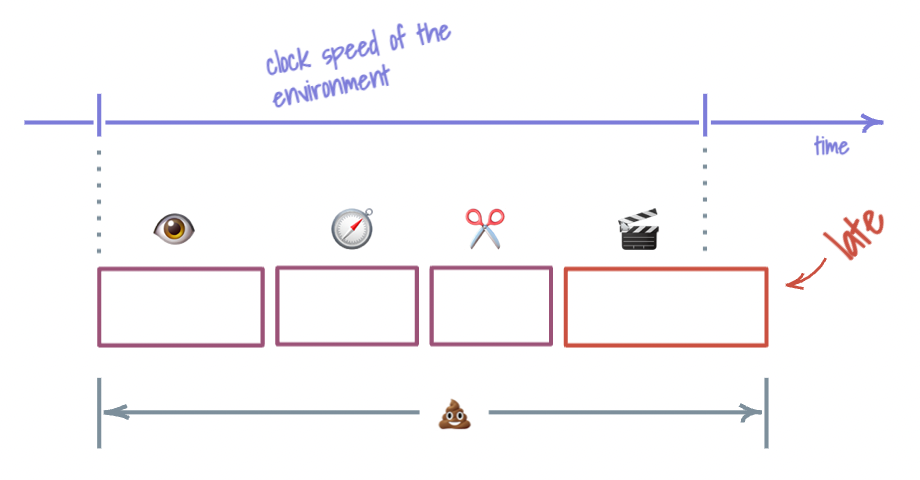 Since I’ve just concocted a different way to look at the OODA loop, I might as well add another twist. Unlike in Boyd’s original military context, OODA jank is not lethal for most organizations. It is something that happens commonly, perhaps many times over.

Team jank is not great news, but most of the time it’s not existential, either. Deadlines get missed, but things still get delivered. People are late to meetings, but they do show up. Product launches get delayed, but most often, still happen at a later date. Human systems aren’t mechanical. They tend to be more resilient to jank. When rendering Web pages, a late-to-render animation frame is completely dropped. In organizations, being late just means reduced effectiveness, a miscalculation and wasted energy.

As a result, organizations typically feel jank not as one specific incident, but rather as cumulative effects of multiple instances. Perhaps we can use this newly-minted framework to dig into these effects?

One thought on “OODA, unrolled”